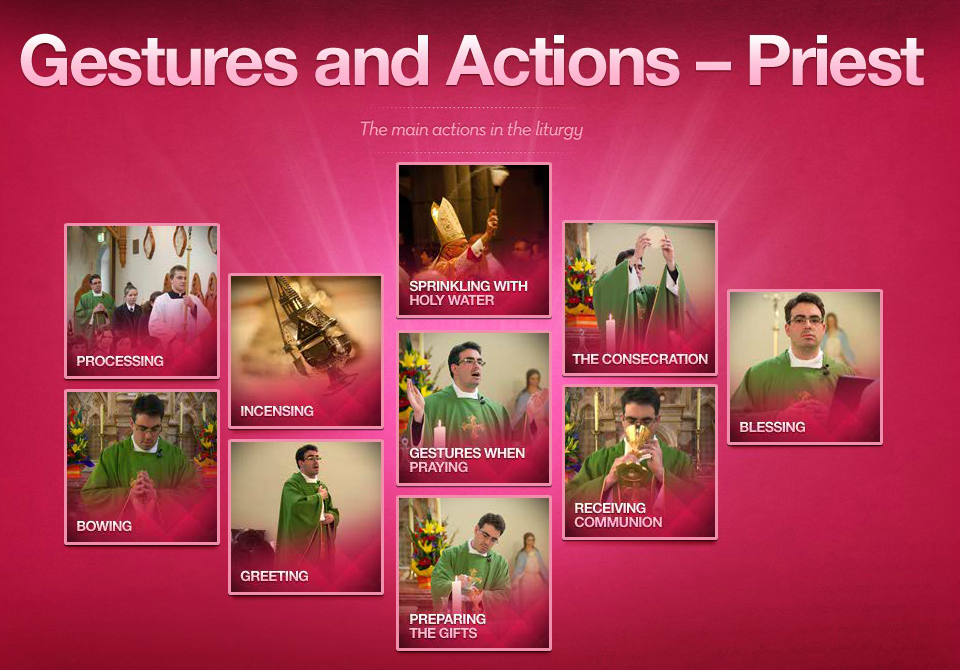 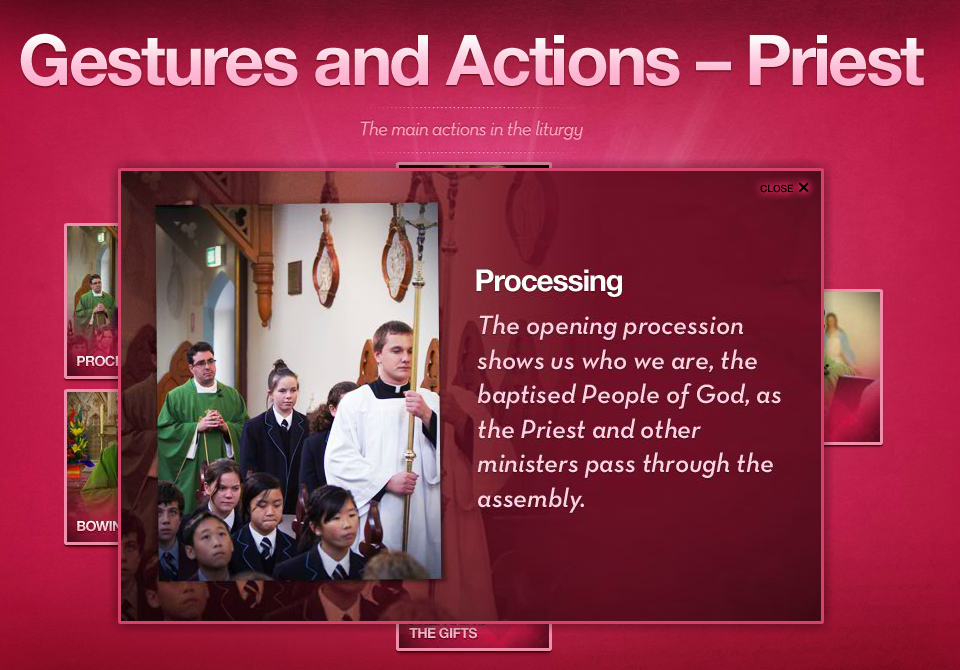 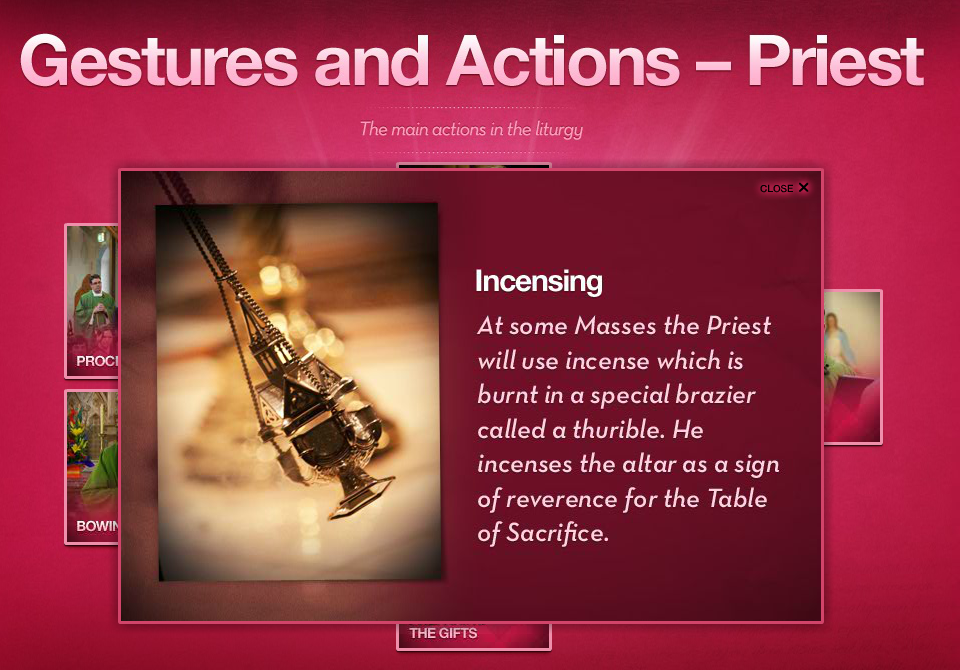 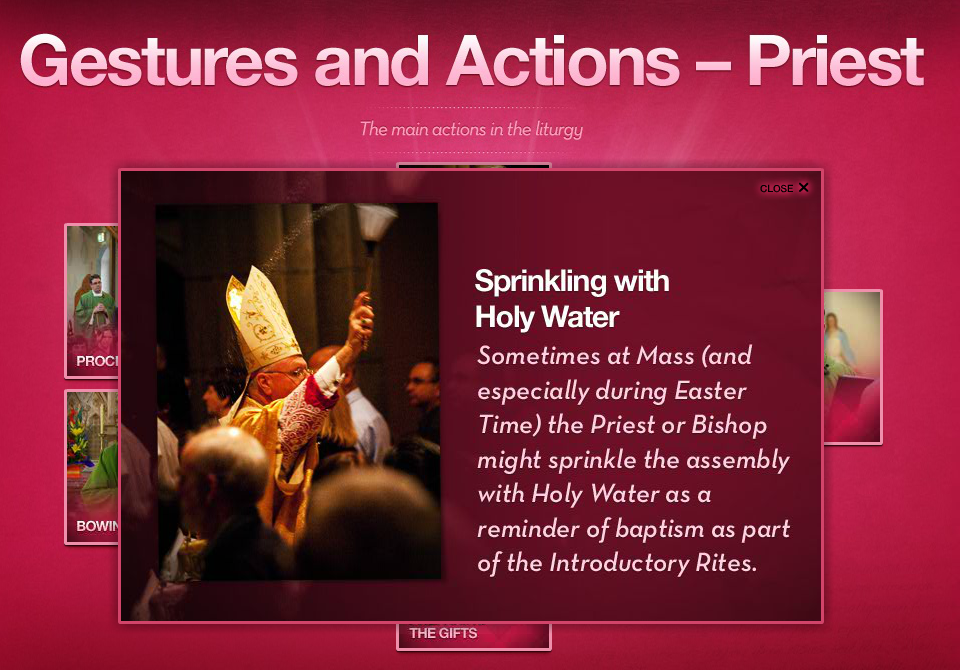 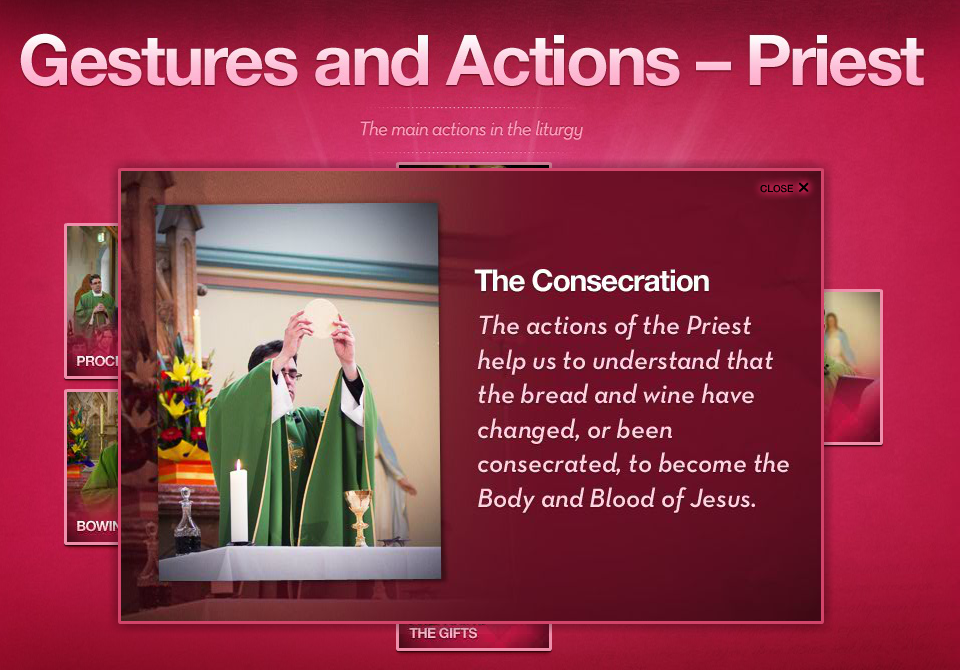 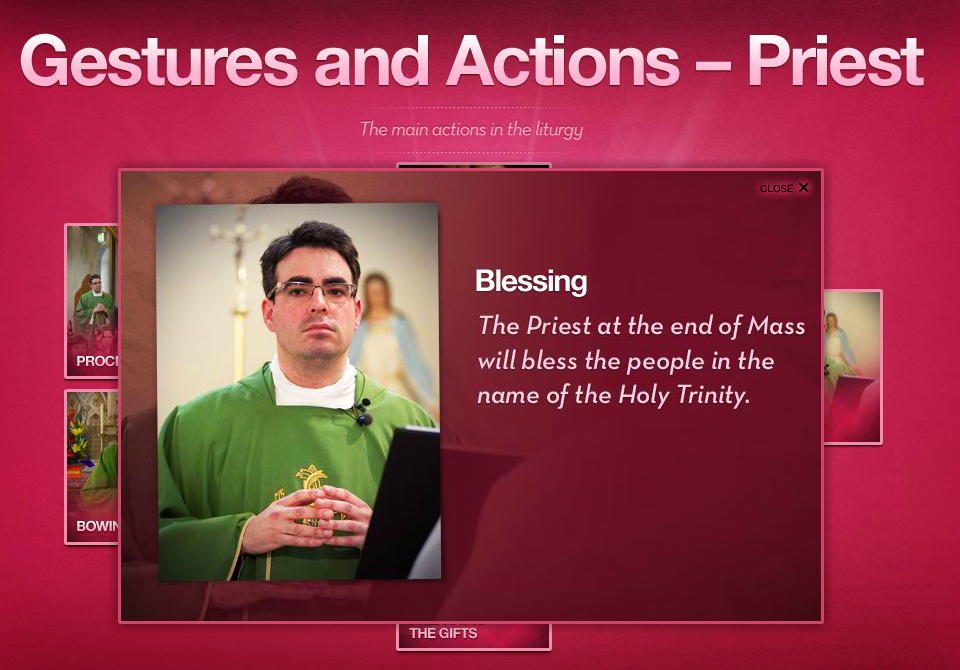 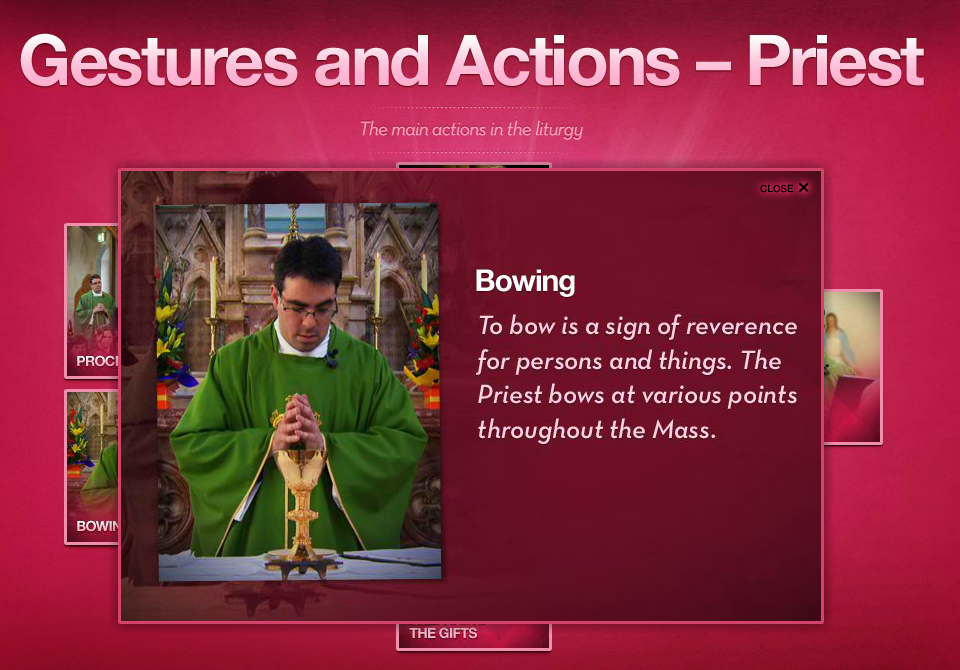 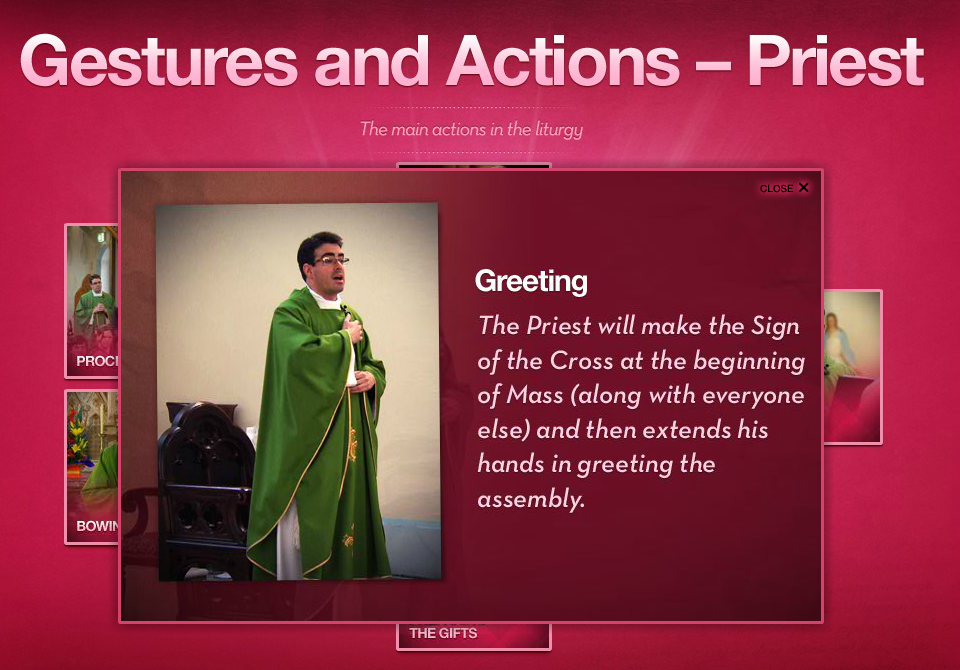 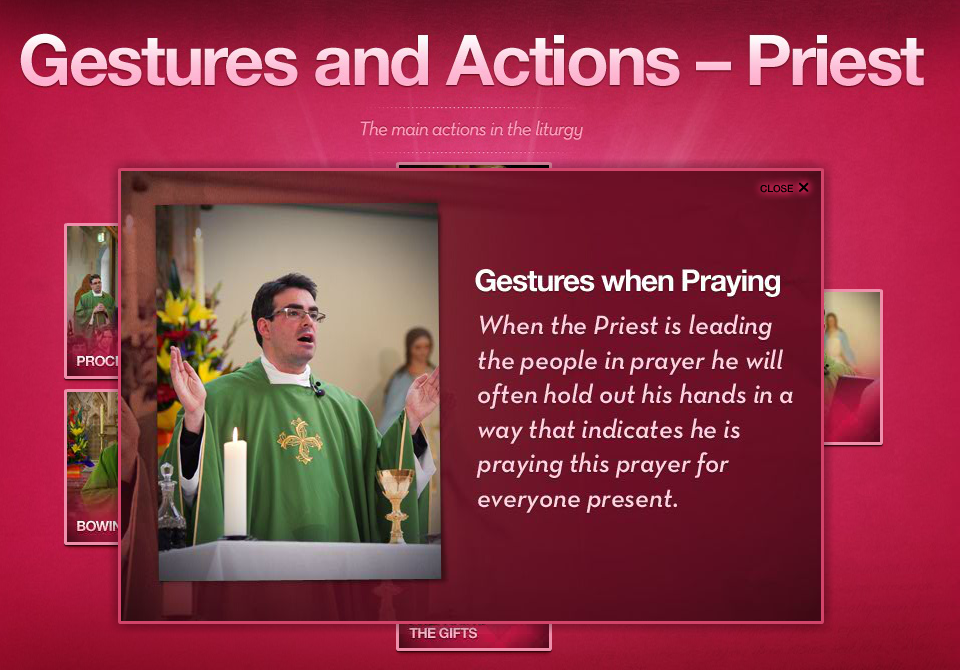 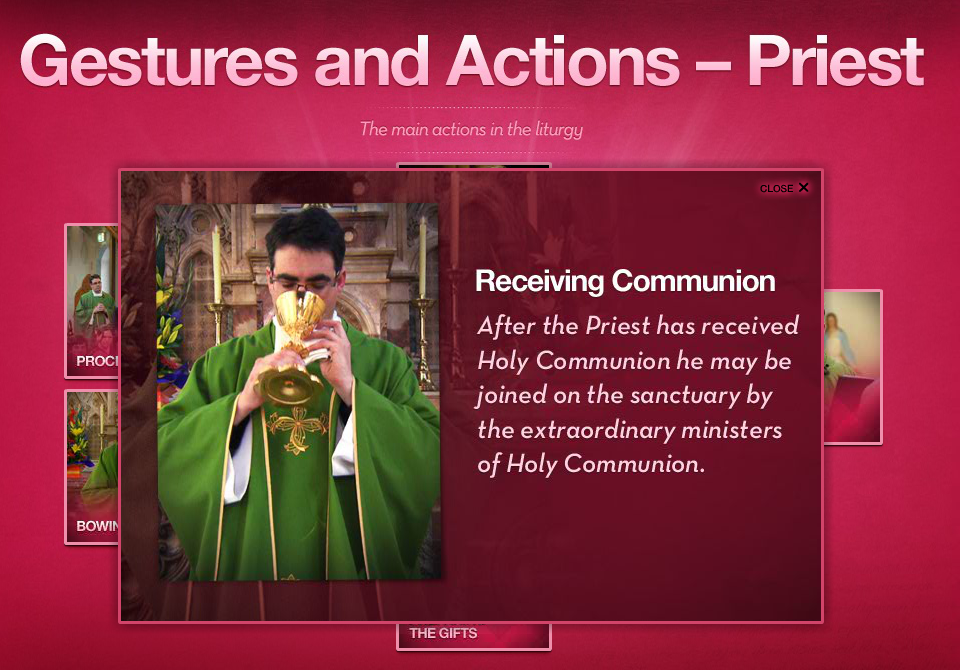 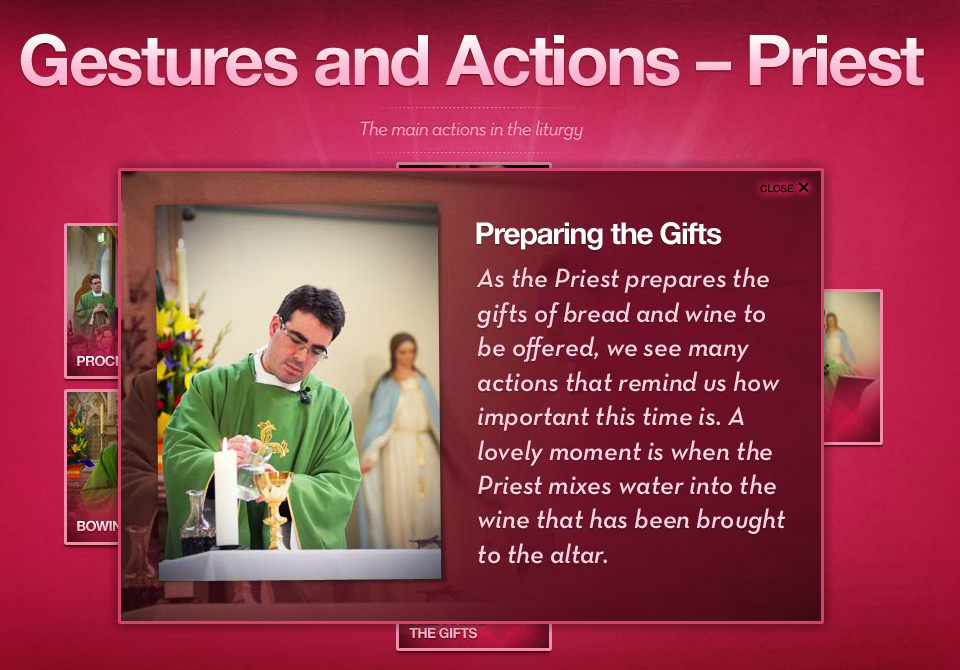 GESTURES AND ACTIONS - THE PRIEST

The main actions in the liturgy

One of the main actions that we see during the liturgy is processing, or moving towards or away from the sanctuary. The opening procession shows us who we are, the baptised People of God, as the Priest and other ministers pass through the assembly. As the Gospel Acclamation is sung the Book of the Gospels is brought in procession to the lectern or ambo. Jesus is present in the scriptures. We listen to God’s Word. When the Mass is ended the altar servers and Priest process out of the church as the people stand and sing the final hymn.

To bow is a sign of reverence for persons and things. In Mass the Priest will bow when he comes to the altar at the beginning of Mass (unless the Tabernacle is in the sanctuary, in which case he will make a genuflection in honour of the Presence of Christ.) At other times during Mass the Priest will bow – during the Nicene Creed when mention is made of the incarnation (when the Holy Spirit came upon the Blessed Virgin Mary and she conceived Jesus); and during the Preparation of the Gifts when he says a quiet prayer.

The Priest will make the Sign of the Cross at the beginning of Mass (along with everyone else) and then extends his hands in greeting the assembly.

Sometimes at Mass (and especially during Easter Time) the Priest might sprinkle the assembly with Holy Water as a reminder of baptism as part of the Introductory Rites. This water is sometimes blessed at the Mass or during Easter the water is that which was blest at the Easter Vigil.

When the Priest is leading the people in prayer he will often hold out his hands in a way that indicates he is praying this prayer for everyone present. This gesture has a special name – it is called the orans position.

The key part of the Mass is the offering of the Eucharist. The gifts of bread and wine are brought forward by members of the assembly. These gifts represent the life and labour of this assembly that has gathered. As the Priest prepares the gifts of bread and wine to be offered, we see many actions that remind us how important this time is. A lovely moment we see during the preparation for Consecration is when the Priest mixes water into the wine that has been brought to the altar. He says: By the mystery of this water and wine may we come to share in the divinity of Christ who humbled himself to share in our humanity. The mixing of the water and wine reminds us that we are all joined in Christ and he is one with us, both human and divine.

As the Priest continues the Eucharistic Prayer he raises the bread, and says: Take this, all of you, and eat of it, for this is my Body, which will be given up for you. An altar server rings the sanctuary bells as the Host is raised. The Priest then continues the prayers and raises the chalice and says: Take this, all of you, and drink from it, for this is the chalice of my Blood, the Blood of the new and eternal covenant which will be poured out for you and for many for the forgiveness of sins. Do this in memory of me. The sanctuary bells are again rung. The actions of the Priest help us to understand that the bread and wine have changed, or been consecrated, to become the Body and Blood of Jesus.

The Priest then concludes the Eucharistic Prayer and after he has received Holy Communion he may be joined on the sanctuary by the extraordinary ministers of Holy Communion. They are given vessels containing the consecrated Hosts or sometimes a chalice containing the Precious Blood. The assembly forms a procession and they come to the altar to receive Holy Communion. As the people come forward to receive the Host they make a gesture of reverence i.e. they bow. The minister of Communion holds up the Host and says The Body of Christ and the person replies Amen. The Host is then placed in the palm of the hand of the person receiving Communion, or alternatively the person can receive Holy Communion on the tongue. They step to the side and carefully put the host into their mouth. The same actions are done with the Precious Blood when the minister says The Blood of Christ.

Interview your Parish Priest about the gestures, actions and postures he enacts at Mass and discover the background and significance of each in further detail.

In your interview include questions on his role in the community. What is the mission of a Priest? How do the different elements of his mission relate to the celebration of the Mass? 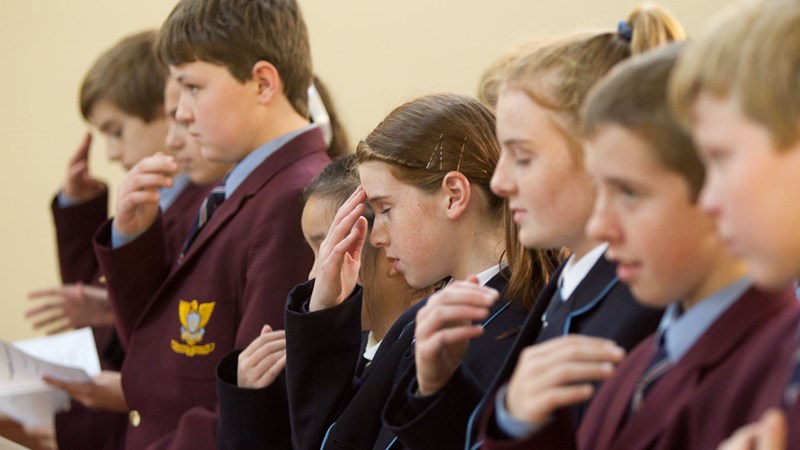 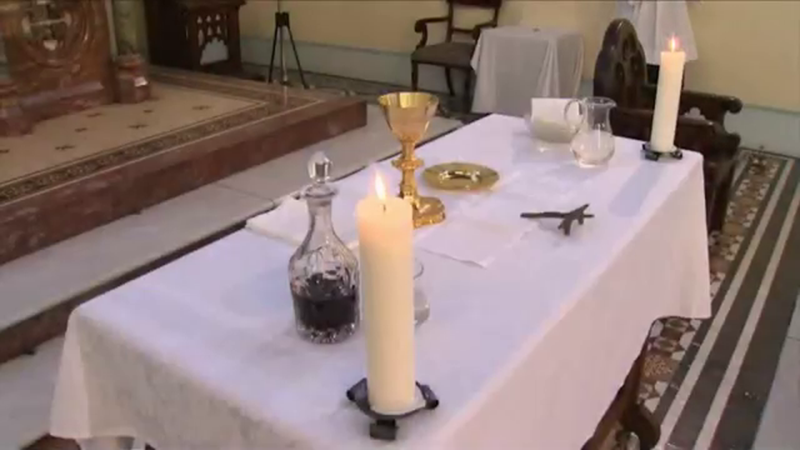